What to do in Paris at night ?

There is so much to see and discover in the “city of lights”: the Eiffel tower, the banks of the seine and the Louvre museum, … These are some of the best tourist sites in Paris to be seen during the day but there is also a whole new Paris to discover at night.

Hop on a boat for the Seine river tour, go for a cabaret show such as the Moulin Rouge, walk the streets for a night walking tour, have a glass of wine or go for a wine tasting is some of the best wine bars in Paris, discover the French capital and the famous Latin Quarter with its iconic restaurants and bars and simply enjoy the city of Paris.

The monuments of Paris on a nocturnal visit

The monuments of Paris, we see them every day while going to work. So often that we do not even pay attention anymore.

For tourists, the discovery of the capital is often done during the day making sure that all the sites and venues are open. But, what if a night tour of the capital, was worth everything you’ve experienced so far?

Let’s face it, the city of light cannot deserve its nickname if not experienced at night when the Parisian monuments light up to offer magical shows. So, let’s start our Paris night tour.

Difficult to talk about the monuments of Paris without mentioning the Pont Neuf. The bridge of the seventeenth century, listed as a  historic monument and listed in the UNESCO World Heritage Site, is the oldest stone-bridge of the capital. The Pont Neuf Bridge is a monument to visit in the evening when it is illuminated and it reflects in the river.

Your night walk of Paris necessarily passes by the pyramid of the Louvre. The creation of the artist Leoh Ming Pei, does not go unnoticed in the center of the Napoleon courtyard of the Louvre.  In fact, this pyramid of glass and metal is today a key element of urban architecture and the famous Parisian museum. And at nightfall, the structure lights up to play its transparency in the middle of the imposing buildings of the eighteenth century. What would be Paris without its famous pyramid? 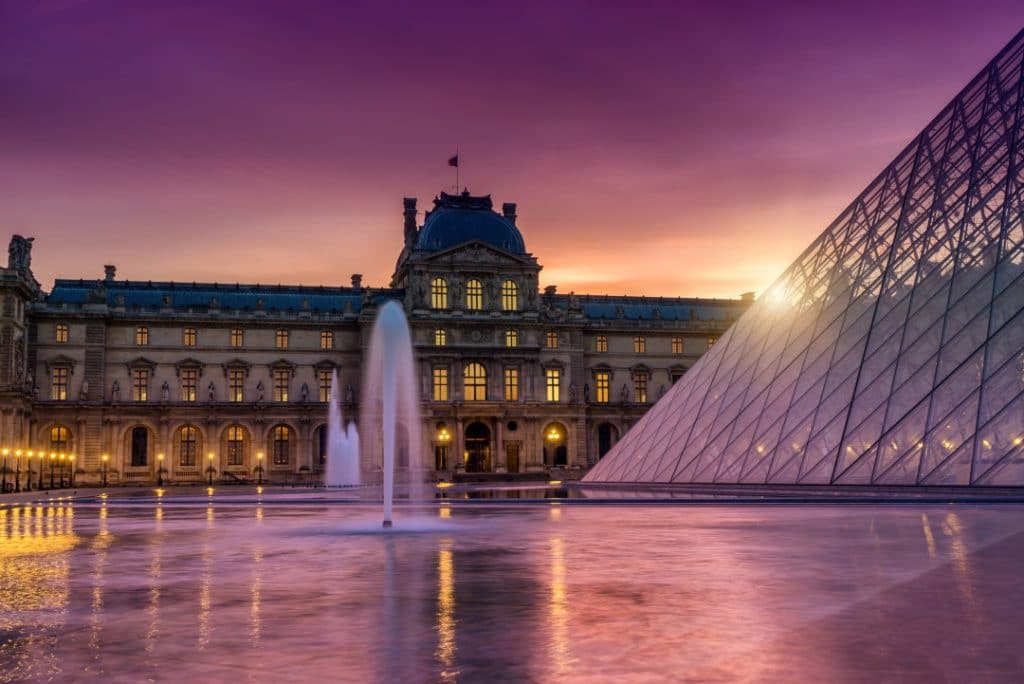 Impossible to evoke Paris monuments without stopping at the foot of its most famous cathedral. At night, the extraordinary volumes of the “Sacre Coeur” are even more majestic with the illumination, paying tribute to the hard work of the builders. 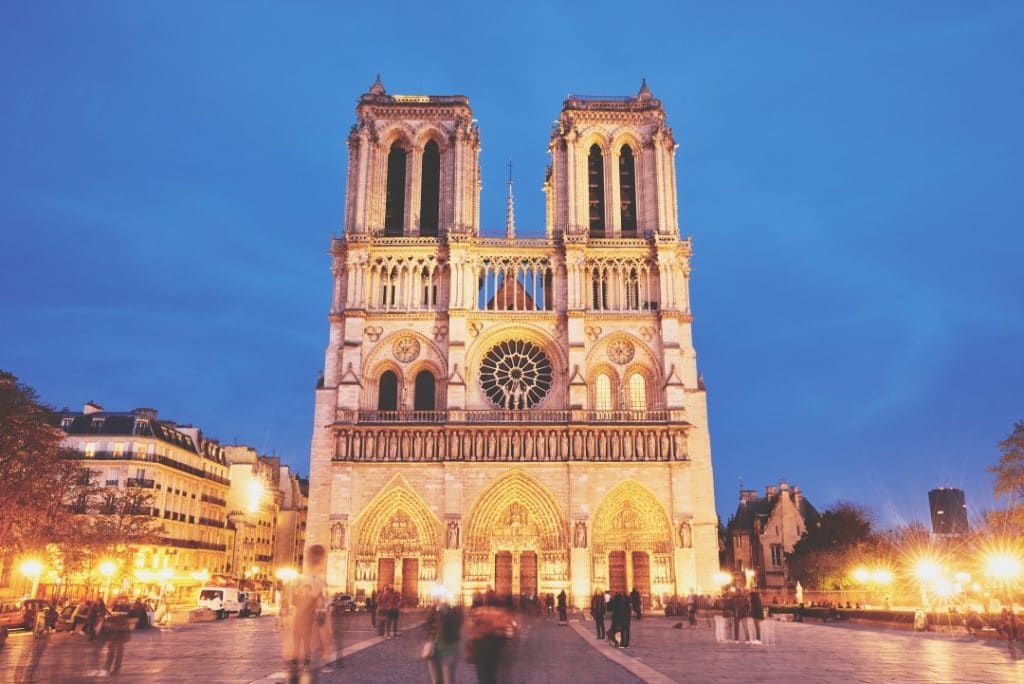 Night tour of Paris under the Arc de Triomphe

The Arc de Triomphe, during a night visit of Paris, impresses with its exceptional dimensions.

In the centre of a crossroads with 12 major Parisian streets and avenues, the Arc de Triomphe stands on la Place de l’Etoile, and at the end of one of the most famous avenues in the world: the Champs-Elysées.

Built under Napoleon the First, to perpetuate the victories of the French armies, it has since World War I the symbol of patriotism, by hosting the remains of the Unknown Soldier whose flame is revived daily. When the sun sets, this neo-classical arch imposes its historical figure in the heart of Paris with its meticulously measured lighting. 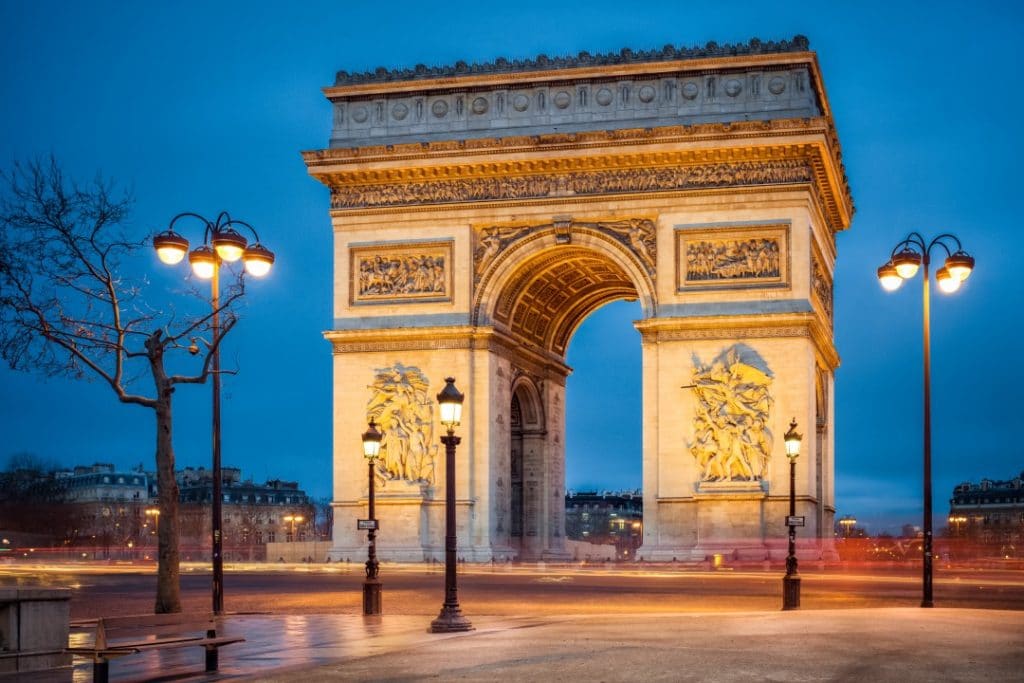 The fountains of the Place de la Concorde

The monuments of Paris are diverse and varied. The fountains of the Place de la Concorde represent the sea, the ocean, the fishing trade, and also astronomy.

The Place de la Concorde is one of the most beautiful French places. Dominated by the famous obelisk, it also hosts two monumental fountains dating from the transformation of this place in the nineteenth century, the Fountain of the Seas and the Fountain of the River. These imposing works, which celebrate the fluvial and maritime navigations, become true works of art at night when the light plays with the gushing water and gilding of the sculptures. 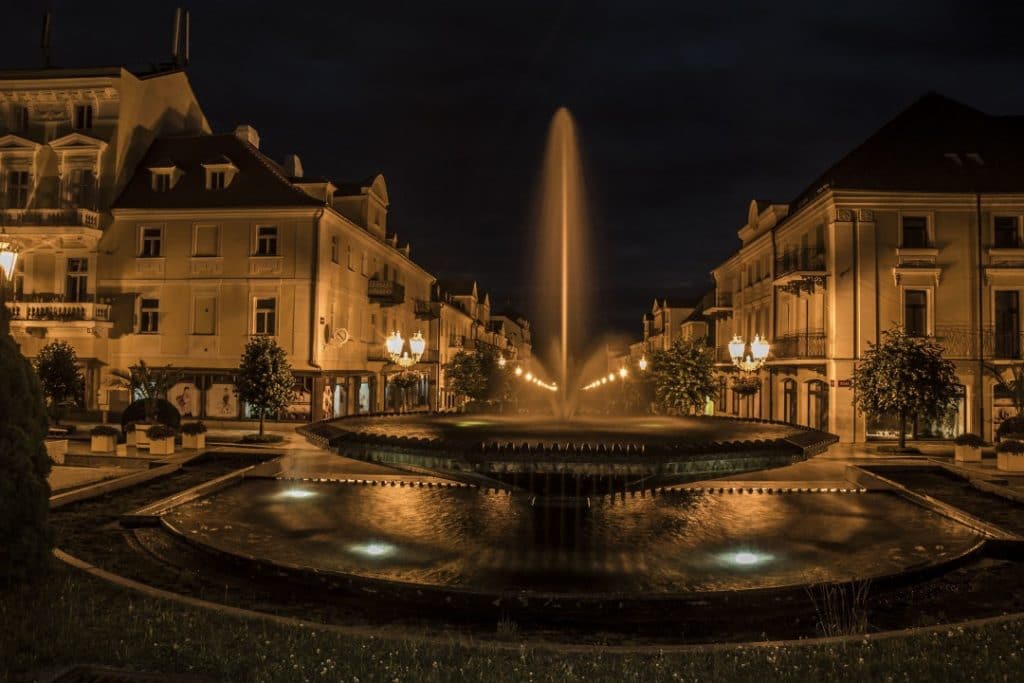 Headquarters of the Paris municipality since 1357, the Town Hall has undergone numerous destructions and reconstructions. The facade is adorned with numerous statues representing personalities who have marked the city. Its current appearance, neo-Renaissance, dates from the late nineteenth century and is inspired by the old building that was ravaged by a fire during the Paris Commune. The remarkable architecture is transformed during its illumination, allowing everyone to contemplate the richness of this place full of Parisian and French history. To see during your nocturnal visit to Paris. 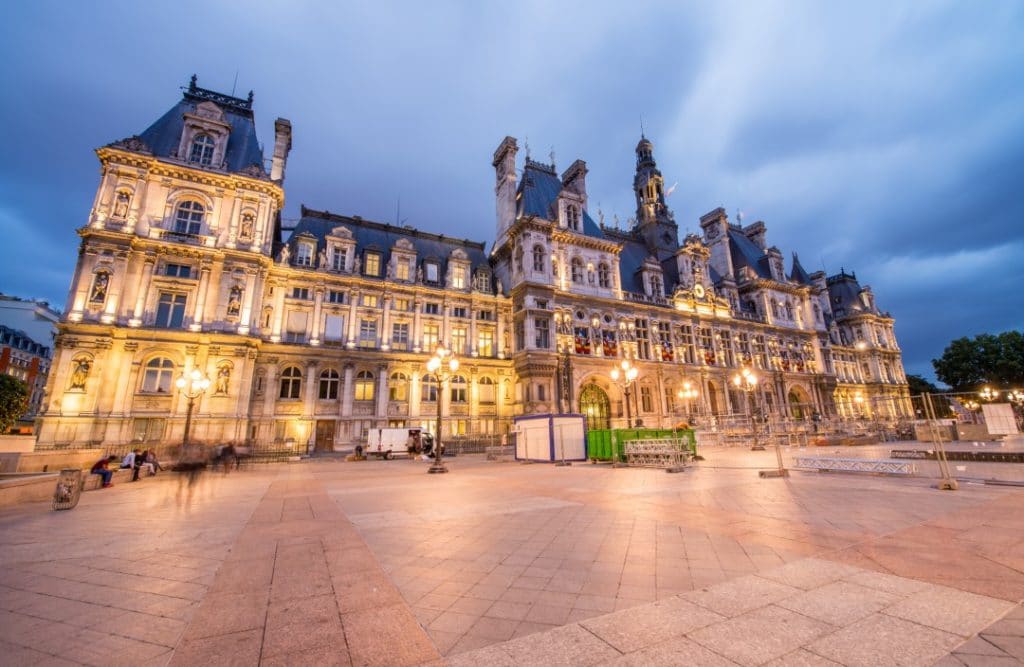 The Eiffel Tower, the most famous Parisian monument, with its 324 m, is also the highest monument in Paris. The other monuments of Paris would feel good alone without the upper look of the Eiffel Tower in the city. The Iron Lady, the true symbol of the French capital, is a monument not to be missed during its illumination. From its twinkle at the beginning of each hour to its lighthouse that whirls at its summit, the Eiffel Tower is adorned with its most beautiful bright décor, radiating well beyond the borders of Paris. This French emblem never misses an opportunity to spread a beautiful image of our country to the rest of the world. 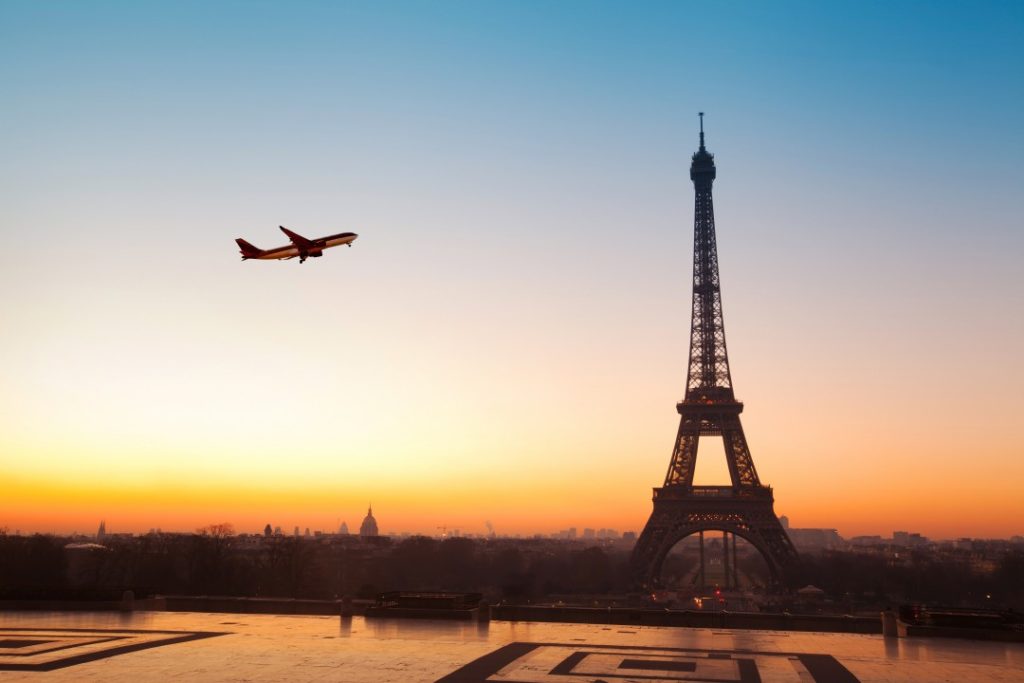 How to find the best bars in Paris

As Hemingway said, “Paris is a party” and what a party! If you live in the capital or you are just passing through, you must absolutely enjoy your weekend to spend an unforgettable moment. We discover bars in atypical neighbourhoods, we dance until the early morning on barges … Paris is a party and we must enjoy as much as possible. So, take your chance to discover some of the best bars and clubs in Paris.

The best pub crawls in Paris

Choosing the right organizer for your pub crawl is key to an excellent evening of fun and party. We have tested a bunch of great tours offering interesting bar hopping and we highly recommend Riviera Bar Crawl & Tours for one of the best pubs crawls in Paris. 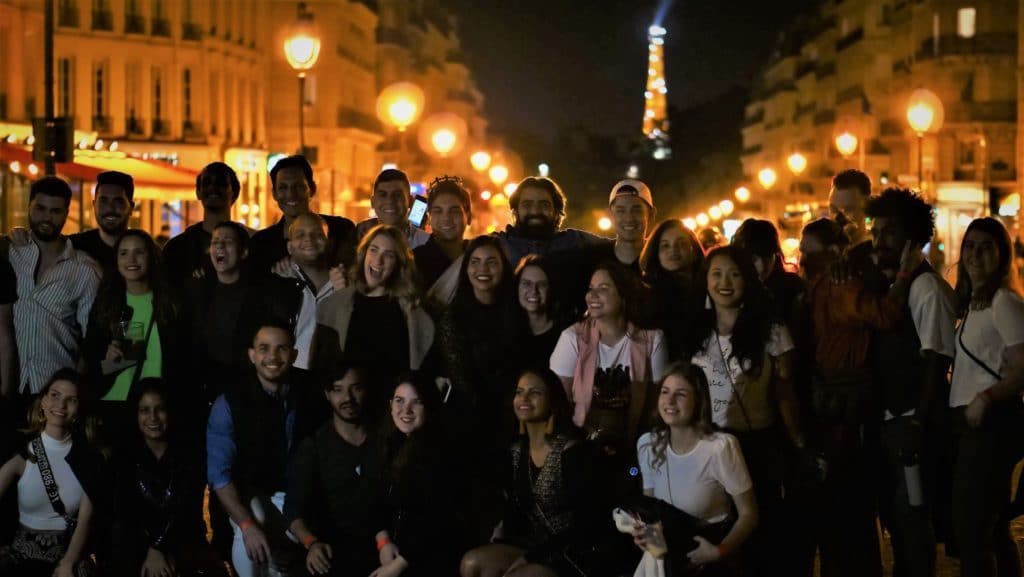 Original things to do in Paris at night

It is now late evening and it is time to discover some of the Paris nightlife. Sure, you will have a great choice of bars and clubs but there is much even much more to do in Paris at night.

People who read this article also read  How is Paris nightlife

Be among the first to open the Carmen, the 9th arrondissement / SoPi club, is one of the best clubs in Paris. Opening at midnight, it is best to arrive before the crowd.

Change in the locker room of the Pontoise pool and feel good by going a few laps in the heart of the 5th arrondissement.

Listen to a gipsy jazz concert in the 18th arrondissement at Les Noctambules ‘till 5 AM.

Take yourself to Cape Verde while having a last drink of rum and a “muy caliente” evening at the Ambush in the 9th arrondissement.

Change your style by making an appointment for a shampoo/cut/brush session with this hair salon open all nights at each full moon.

Midnight is the last session at Champo on Saturday. Choose the “3 movies + breakfast” package, which offers a cinematic catch-up session at a lower cost.

Head to the 10th arrondissement and devour a Kurdish sandwich in a wood-fired patty, considered by many to be the best kebab in Paris.

Discover our other guides ;

How is Paris nightlife

Where to go in Paris bars?