Nice – A Brief Overview of the City of Sun, Victory and Art

On the south-east coast of France with a backdrop of the Mediterranean sits Nice. With over 1 million inhabitants, it is the second largest French city on the Coast. Like many of its neighboring cities, Nice is known for its warm climate and lovely pebble beaches. However, unlike its siblings, Nice is a more approachable destination for the regular traveler.

Although it does have its aristocratic aspects, it has a very friendly and inviting atmosphere. As such, you’ll find the city bursting with explorers, from the Old Town to the Promenade des Anglais. Ultimately, Nice is a cultural hotspot that is personally my favorite city along the Cote d’Azur. In this article, I provide you with some basic information about this beautiful city.

Originally founded by the Greeks in 350 BC, Nice was initially named after the Greek Goddess Nike. Nikaia, as it was known, was under the control of the Savoys for a long period of time. However, this was only until the 19th century when France finalised its control over the city. Over the years, the city has been under the command of multiple powers. As previously mentioned, it has obviously been influenced by the Savoys in the north. But it has also had a consistent union with the Italian regions of Piedmont and Liquria. From the architecture to the cuisine, it’s clear that half of Nice’s heart still belongs to Italy.

It seems off, having a promenade named after the English when the climate and atmosphere is anything but. The name “Promenade des Anglais” is actually directly linked to the differences in climates. In the 18th century, the aristocracy of England was looking for an escape from the pollution and gloomy mood of London. Hearing of the sunny days on the Mediterranean, many migrated south to Nice and its neighbouring cities for the summer. The clean and fresh air of the Cote d’Azur became an antidote. As such, the now famous promenade still bears the English’s influence by name. Now anyone can stroll down the path with the sun on your face and the ocean air filling your lungs. It is no longer only the locals or the European aristocracy that get to enjoy this luxury.

Another famous reminder of the English’s influence are the numerous resorts now littering the Coast. This includes the famous Hotel Negresco which sits along the Promenade des Anglais. It was one of the many hotels opened due to the high demand of the bursting tourist industry in the 19th and 20th centuries. Now, it stands both as a luxurious place to stay and an institution in Nice.

The Hotel itself has undergone a traumatic history since its opening in 1912. During World War One, the hotel was taken and turned into a hospital for the casualties of the war. After some years of financial difficulty following the end of the war, it was eventually sold to the Augier Family. Its colorful current owner Dame Jeanne Augier has created a center of Nicois and French culture. Having been a frequent art collector, the Hotel now boasts creations from renowned artists. This includes Chagall and Matisse. Naturally, the Dame frequently had well-regarded guests visit such as Picasso and Dali.

To say nothing of its current famous clientele, the Negresco still remains a statement of luxury, style, and culture in Nice.

A short 2-minute walk from the Promenade des Anglais is Nice’s’ Old Town and town center. Place Massena is home to the famous Apollo statue. It is well known for being too offensive to the religious ladies in 60s of last century. As a result, certain parts of the statutes anatomy has been maimed multiple times, and actual statue and fountain having been moved multiple times. Now it stands proudly in Place Massena, which is the center of the city. It is the perfect place to meet with friends or just sit in Nice’s’ beautiful gardens. It is right next to Avenue Jean Medecin, the shopping street of the city.

If you’re after something with a bit more history, head towards the Old Town. The narrow streets with numerous cafes, boutiques, ice creameries, churches and fountains are delightful. Moreover, Old Town is a window into the cities past. It becomes clear as you go from the red ochre buildings of Place Massena to the twin models in Old Town that Nice’s Italian influences are still held dear.

Place Rosetti is one of the typical squares you’ll find in Old Town. The beautiful Cathedral Saint Réparte and red and yellow ochre buildings overlook the square, giving you a beautiful view. You don’t need any real plans when visiting Old Town. You just have to let yourself go with the flow. Old Town has enough to keep you entertained for days on end.

Furthermore, Old Town is a cultural hotspot not only for architecture and history. It is also home to a number of different markets, most famously, the flower and garden market. Nice takes its gardens very seriously. As such, the daily flower market in the Court Saleya is close to a religious affair. This is another famous square in Old Town which by night is lit up by lights and music.

In addition, the same square is home to an awesome antique market on Mondays and vibrant markets with fresh produce, local cheeses, cured meats, bread, and traditional foods on any other day. One of the most revered, and my personal favorite, is Socca. Simply made out of chickpea flour, the savory pancake is topped with spices, making the perfect late-night snack. Another must-try is a dish called ‘Pissaladière,’ which is a pizza type tart with caramelized onions and anchovies and/or olives on top. You’ll find these dishes in almost all the bakeries and side stalls around Old Town. 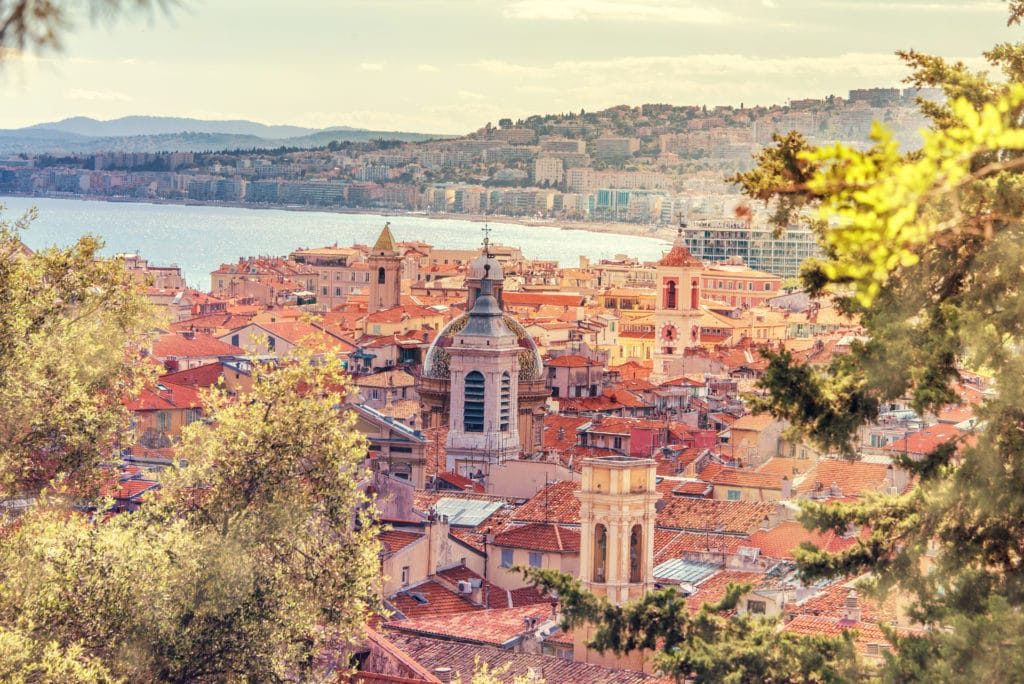 While you’re walking around the Old Town or anywhere in the city really, you may look up and notice Castle Hill. The Hill overlooks the whole city and makes for a small but decent hike at 92m above sea level. Although it’s called Castle Hill, the remains that you can see are not actually from a castle. Known as the Chateau de Nice or the Colline du Chateau, the structure was a fortress and an active military citadel. Onwards from the 9th century when it was built, it resisted siege and was never taken. This changed however when it was destroyed and overrun by the French King Louis XIV in 1706. The fortress and its walls were then dismantled, leaving only some remnants of the wall you can still see today.

It’s also worth mentioning that after Paris, Nice is home to the most museums in France. Two of the greatest and most well-known artists of the 20th century have entire museums dedicated to their work. These two museums, Musée Matisse and Musée Chagall are two of the three most renowned in the region.

The third is considered the Museum d’Art Moderne, which exhibits some of Nice’s most famous residents. This includes works from Ben and Niki de Sainte Phalle, in addition to pieces from Picasso and Andy Warhol. So too is there a small museum dedicated to the artist Auguste Renoir that operates out of his family home in Cagnes-sur-Mer. It gives a brilliant insight into the artists every day and family life. You get a glimpse into the mind of the amazing artist with access to his studio and estate, which is filled with amazing sculptures, photographs, paintings and more.

It should be pretty obvious by the end of this article that Nice is a must see when visiting France. Not only is it the home of culture, but it is unique in its different historical influences. Simple Mediterranean life is perfectly captured in this laidback atmosphere. Its historic beauty and grace are contrasted to the fast pace of modern life, meaning there is never a lack of things to do and see around the city. Personally, I love just exploring the random streets around the city. You can understand why so many artists called this place home when you experience firsthand the vibrant climate and chill vibes of the city.