THE FAMOUS FOOD IN NICE FRANCE

Discover in this article what is the famous food in Nice France ! Nice well know for its tourist appeal as well as its lifestyle and the niçoise cuisine.

Nice is a city I love for the atmosphere of its old town, its warmth, its colors, the magnificent view of the Bay of Angels (not surprising that it has inspired artists like Matisse), and above all, the “Nissarde Cuisine” and this unique way of cooking!

Food in Nice and on the Cote d’Azur is a lifestyle. It is a passion that you will find in many family-run restaurants such as the Rossettisserie in the Vieux-Nice. Here the local cuisine is a Mediterranean cuisine where ratatouille is often served along with the famous “Petits Farcis” and the Panisse made of chickpea flour.

Traditional and Mediterranean cuisine is based on vegetables, flavors, and scents.

The “Cuisine Nissarde” is a label awarded to restaurants working to preserve the cuisine of Nice while respecting the traditional recipes of the region. The cuisine of Nice is influenced by Italian cuisine and products from the area and is unique in France.

In Nice, gastronomy is an institution. So much so that the capital of Alpes-Maritimes created the Cuisine Nissarde label in 1998 to preserve its traditional recipes. Here, the cuisine is a culture. It is generous, as everyone is in Nice.

Pissaladière, soup with pesto or salade niçoise, these specialties of the city of Nice are known to all. During a culinary trip on the French Riviera, the habits are very varied, composed of many vegetables, meats, aromatic herbs, and fish. If many recipe titles say “à la niçoise,” this is neither a sauce nor a method of preparation of any kind, because the professional assures that each dish has its specificity!

The salads are often garnished according to the desires, except for the Salade Nicoise, where nothing is left to chance. If it contains a lot of ingredients, these are precise: tomatoes, peppers horns, celery branch, radishes, and young Mediterranean onions. At this base are added boiled eggs, olives, and basil. Tuna and anchovies, which are essential in this dish, bring the marine a Mediterranean touch. But for god’s sake, no beans, no potatoes, grated carrots, red beets, or endives! 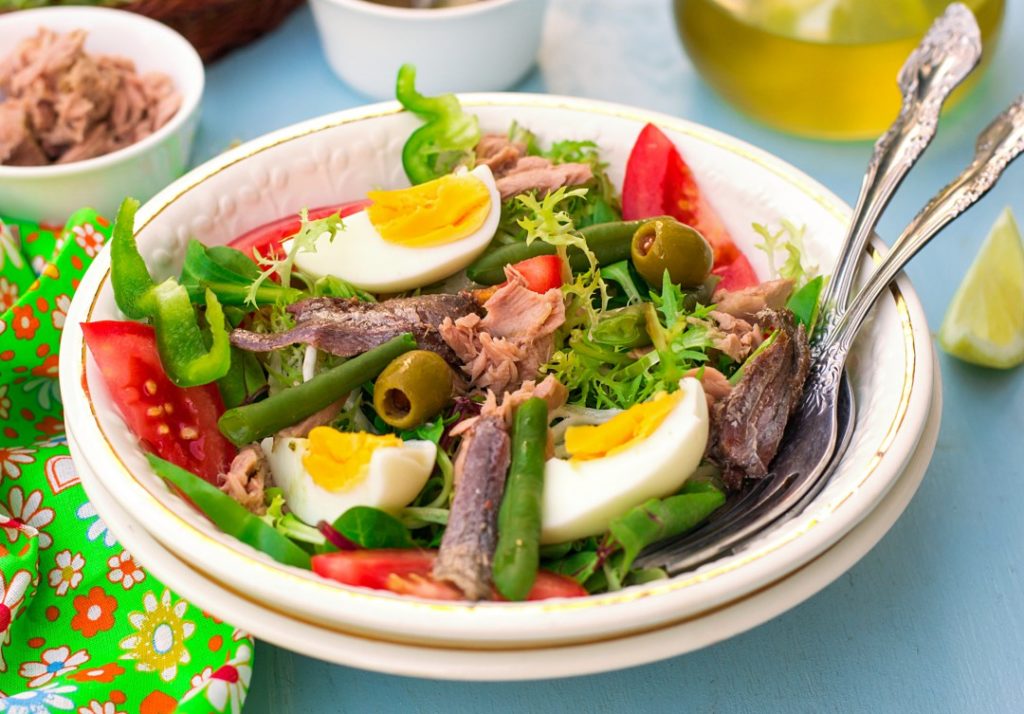 The traditional tourist “vegetable sandwich” of tourists of the past has also become famous. Containing the same elements as the salade niçoise, the Pan Bagnat is placed in a round bun, abundantly oiled; it is eaten cold (without mayonnaise or chicken!) Beware of the imitations you sometimes find around town.

3. The “Daube Nicoise”: a summer and winter dish

The Daube niçoise is a stew is a bit like the beef bourguignon that you eat in the winter, but be aware that there is no season to taste a daube. Beef simmered in wine is often accompanied by another specialty of the city, the gnocchi. They are prepared with a mixture of wheat flour and potato. Unlike other culinary dishes, Nice, no rule is established. In Nice, the stew can also serve as a stuffed ravioli. 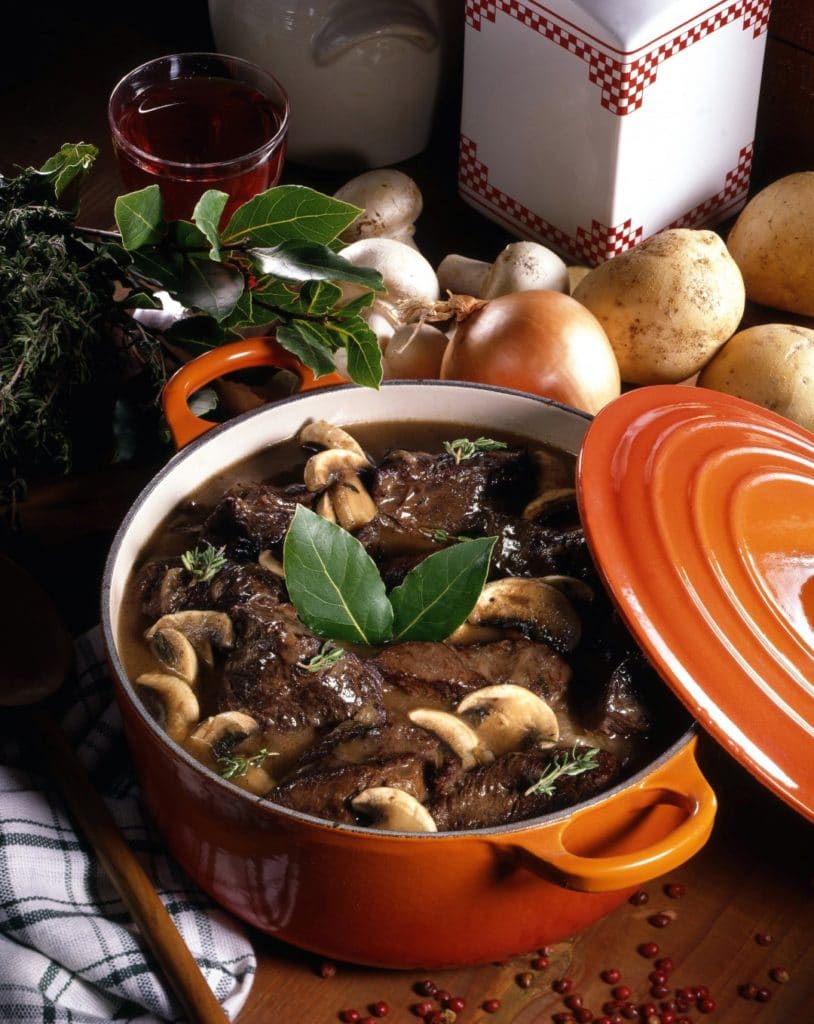 Potato Gnocchis are small dumplings of potato flour and egg, cooked in water, and tasted with a drizzle of olive oil or a sauce of your choice (with cream of cepes, pesto, etc.). Do not leave Nice and the South of France without tasting; it’s delicious.

In Nice, we do not mix it all! Ravioli from Nice are exclusively made with chard and beef stew. And it is the cooking of the stew that provides the sauce. Salmon, ricotta, cheese, and other exotic ingredients are to be banned absolutely. 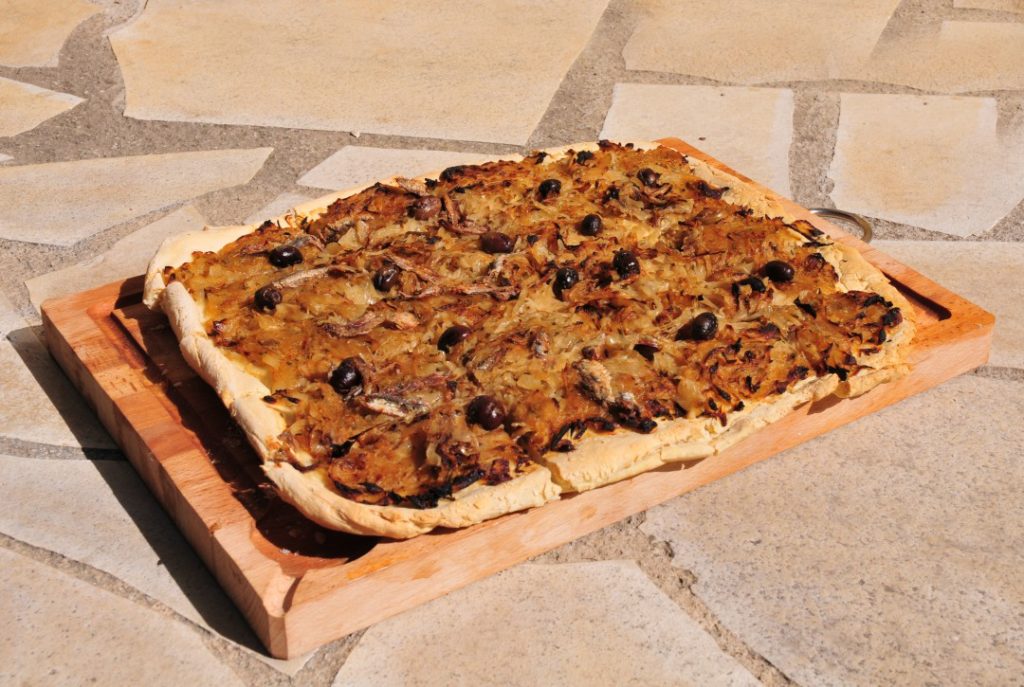 As much to say it immediately, it is a pure delight. Made from bread dough, this pie is not to be confused with pizza as it does not contain tomatoes. On the other hand, it is garnished with onions “compote” and anchovies and decorated with Niçoises olives. It is found in almost all bakeries in the Old Nice. A meal on the go ideal for lunch.

The chard pie is used as a starter and dessert. Only a few ingredients change in preparation. The salty recipe is stuffed with a mixture of rice, Swiss chard, and beaten eggs. In the sweet dish, the chard is served with breadcrumbs, pieces of apple, grapes, and Parmesan cheese or Sbrinz, a Swiss hard cheese made from raw cow’s milk. All wrapped in pie dough.

Stockfisch à la niçoise, “the dish of the ancients.”

Composed of fish casings, Stockfisch is not appreciated by all palates. It is a special dish but very popular in Nice, especially by the old ones. Dried haddock, or haddock, is rehydrated for a week with running water. “It is then stewed with tomatoes and potatoes.

While pizza, born Italian, has become international, the socca, a popular dish, has remained typically Nice and there are hardly any other places to enjoy it. You can buy the real socca at the stall of some pubs and the markets of Old Nice. It is cut with a squeegee or a half-moon knife, in pieces of 5 to 6 cm wide, and it delights in sprinkling with a pinch of pepper. Above all, you should eat it hot. If you are seated, we will serve you on a plate. But the socca is bought by the traveler, can be eaten while walking. 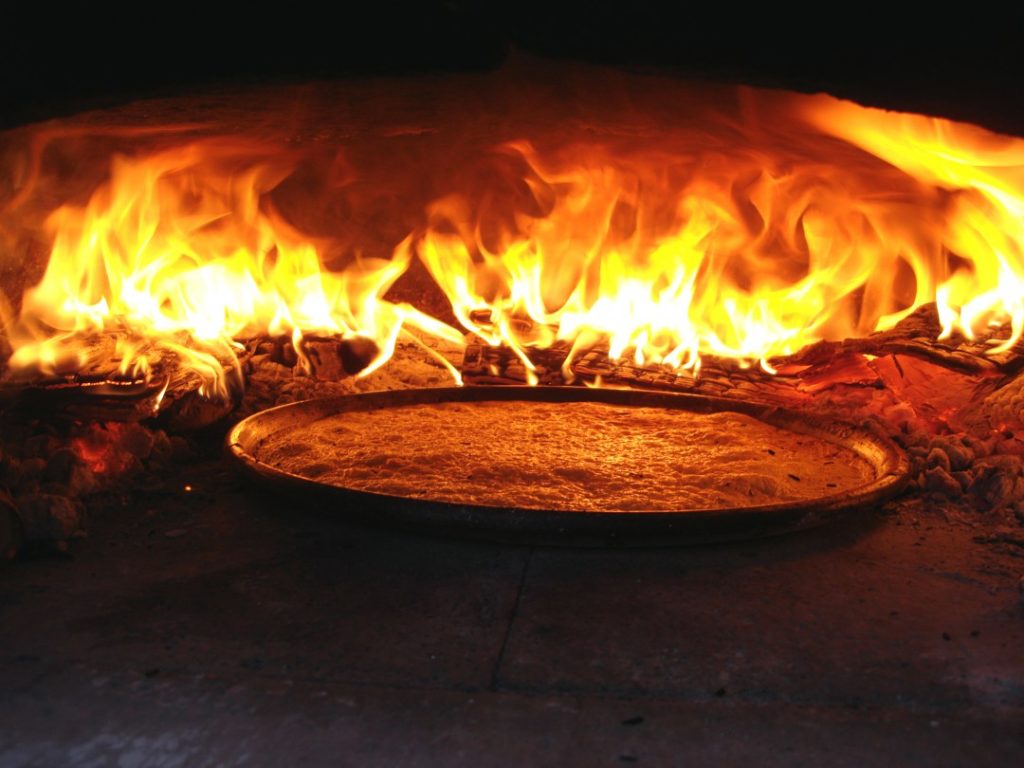 So, beware, purists will tell you that we only cook male flowers here! If you do not know how to recognize a male bud of a female flower, you are given a hint: the female is at the end of zucchini. Usually, you should not go wrong. Then it’s simple: fry the flowers – with or without the pistil, it’s you who see – in a donut dough. Then enjoy them lukewarm, dipped in a niçoise tomato sauce, called saoussoun.

9. The niçoise olives and olive oil

Nice is the land of the Cailletier, an olive world-famous for its exceptional taste. Of these olives already excellent to taste alone because tender and with very developed aromas, one draws oil, soft, unctuous, and very tasty as well as olive paste.

You will find olives in the restaurant, where they are often given as an aperitif.

More products and specialties of Nice :

Few cities have so many culinary specialties. Nice has managed to develop and preserve its culture even in the plates for the delight of gourmands.

But we cannot resume the famous food of Nice by such a small list of dishes like the “soupe au pistou,” the pan bagnat, and the salade niçoise.

Nice is a part of the French Cusine, but also a part of the Mediterranean cuisine; it is about fresh vegetables, eggplant zucchini, swiss chard, olive oil. It is what makes the local cuisine in Nice.

Taste the local cuisine and join our food tours in Nice

What Are Some Things To Do In Nice?
Share