It’s almost immediately evident that Antibes is a special place. Yes, it possesses the familiarly quaint beauty of historic European architecture that you can find across France. However, it also bears resemblance to many other coastal towns. To some extent, my expectations were similar to that of Monaco in its beauty and distance from the regular individual. Instead in its place was a warmth, a feeling of home and connection.

The modern town of Antibes, historically known as the Greek trading port of ‘Antipolis’ sports a rich history of struggle and growth. It’s faced many different occupations following its Greek origins sometime in the 4th century BC. However, its current façade managed to stay impressive. This includes the seizure of the city by the ancient Roman Empire in the first century after Christ.

Remnants of a time long ago are blended into a modern Port town. Multi-million-dollar yachts incredibly, do not take away from its humble inhabitants and atmosphere. You’ll find one of the best examples of ancient times in the defensive walls that still surround the coastal portion of the city. First constructed in the 10th century, refortified ramparts were constructed at the command of the Seigneur (Lord) Rodoart who ruled over Antibes at the time. This followed the fall of the Western Roman Empire approximately 5 centuries prior. The town subsequently spent years as a feudal township at the hands of barbarian tribes.

It’s possible that the Antibes that currently exists, wouldn’t look the same if these walls had not been so effective. They provided future protections from the numerous wars that devastated the region in the following years. 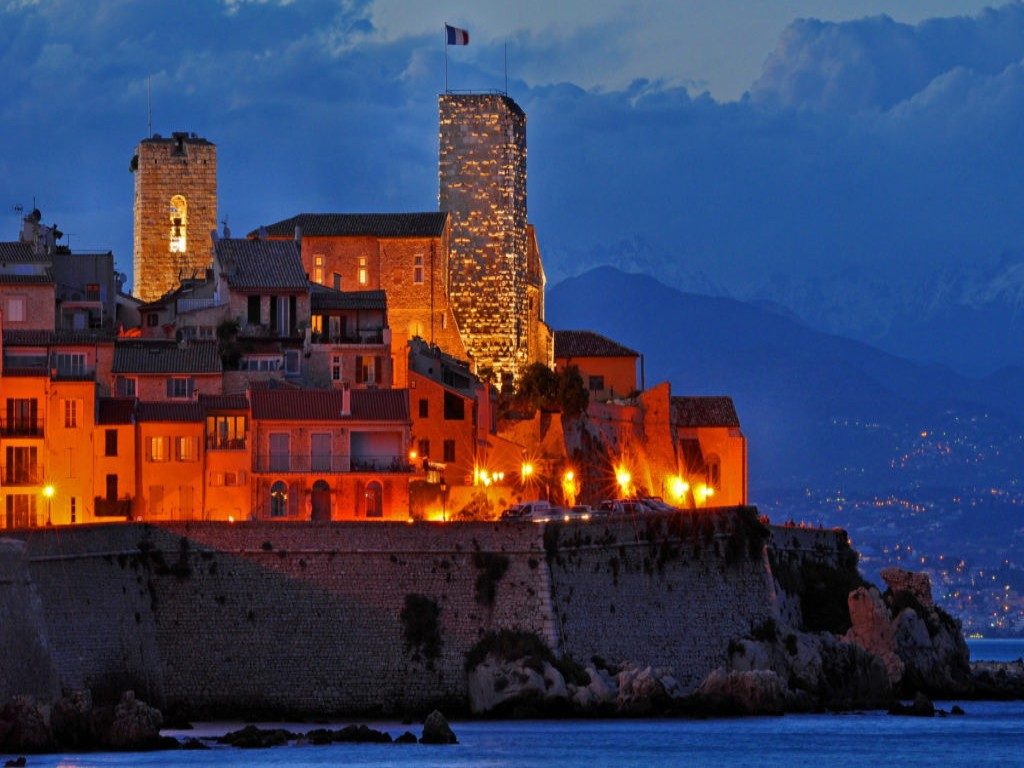 It was in the 15th century that Antibes came under the protection and rule of the then French King Louis XI. It continued, however, to face numerous hostile threats, including the Kingdom of Savoy, who had continuous territorial disputes with France. Further fortifications were put in place in the 16th and 17th centuries. Military engineer Sébastien Le Prestre de Vauban ensured that the ramparts from the Middle Ages were rebuilt by architect Antoine Niquet.

People who read this article also read  What is there to do in Antibes?

Through its toils and success, Antibes has continued to provide as an important Port for the residents of the Côte d’Azur and Mediterranean area. ‘Port Vauban,’ as it’s called today, boasts the title of the largest harbor in Europe, with an impressive 2,000 moorings. The industry it provides is crucial for the local economy. The marina’s capacity to hold crafts more than 100m long attracting the wealthiest individuals in Europe, if not the world.

Whilst the moorings are seasonal, the sheer caliber of the superyacht industry provides work on and off the yachts year-round. Of course, the fame and prestige that comes with such an impressive marina bring with it a wealthy clientele. This supports local artisans, jewelers and in general local businesses, the revenue for local and international workers funding the town’s economy.

Antibes’ current reputation of wealth and beauty considerably increased in the 19th century when the town dismantled its defensive walls. In doing so, it opened up the city to outsiders. As previously mentioned, certain parts of these ramparts continue to stand, primarily around the coast and portions of Old Town.

With this newfound openness came a touristic awakening of sorts. The beauty and relaxed ambiance breathed new life into the ancient city, bringing a number of high-profile artists, musicians, writers, and actors. The range is broad, from Picasso and F. Scott Fitzgerald in the 20th century to the Kardashians and Julia Roberts of today. A variety of well-known characters have graced the private beaches and exclusive hotels that mark the shores of the Cap d’Antibes.

Whilst often overlooked, the Old Towns small roads and paths create a labyrinth of beauty that I would happily get lost amongst any day. Fortunately, I was able to tag along last minute on an Antibes Free Walking Tour with an engaging local. Cedric, the host, shared a love for the simple yet engrossing beauty of the area. Old Town plays host to a small community of the very artists mentioned before. From sculptors and ceramicists to those gifted in breathing beauty into an empty canvas, there is something for all. 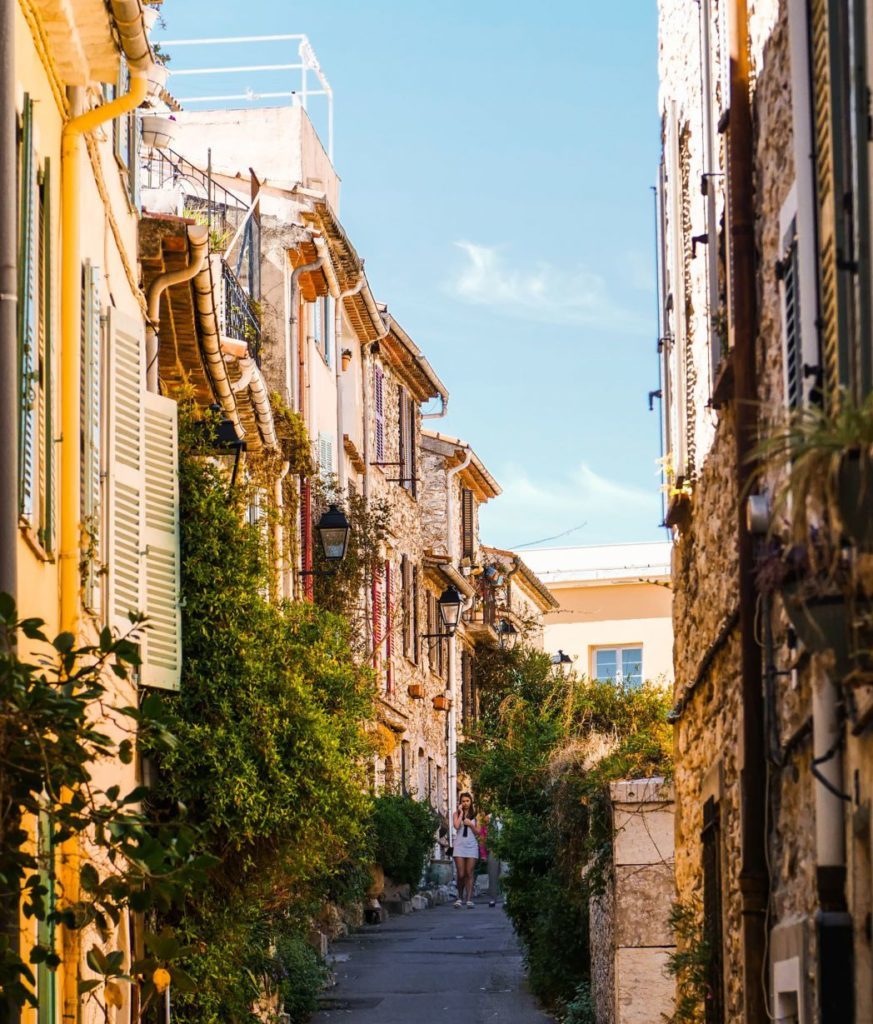 The walls have eyes

You’ll find in this area specifically, faces staring out at you from the walls. No, there is not a random abundance of windows. Rather you’ll find artfully sculpted profiles amongst the crevices and corners, created of course by the local artists. These faces, alluring in their expressions, are accompanied by angels, animals and seemingly random yet bewitching scenes above doorways or alongside windows.

They are combined with seasonal flowers, scattered vines on bright colored windows and narrow cobblestone streets. One can clearly understand why so many artists and writers chose such a place to create. The atmosphere is palpable and inspiration rampant. The calming vibes and coastal breeze feeds ambition whilst simultaneously soothing your soul.

The most famous of them all

It is difficult to discuss the artistic residents of Antibes without mentioning the role Picasso. The man, who helped in shaping the cultural and touristic landscape of the town. Picasso’s dalliances across the French Riviera in the early 20th century resulted in his eventual occupation of Antibes in 1946. The 14th-century chateau Grimaldi situated in Old Town was thus transformed into his personal art studio for 6 months.

Now the museum houses numerous works Picasso created while he lived in its very walls. We could say that the Picasso Museum provides a pivotal snapshot of history. Picasso’s talents went beyond ceramics, tapestries and those displayed on canvas, and extended to the very walls of the Chateau in certain rooms. Being the first museum solely dedicated to Picasso’s creations, there are a reported 245 works in total. This includes 23 paintings and 44 drawings plus pieces from other well-known contemporary artists such as Nicolas de Staël and Joan Miro.

Indulgement in the streets Antibes 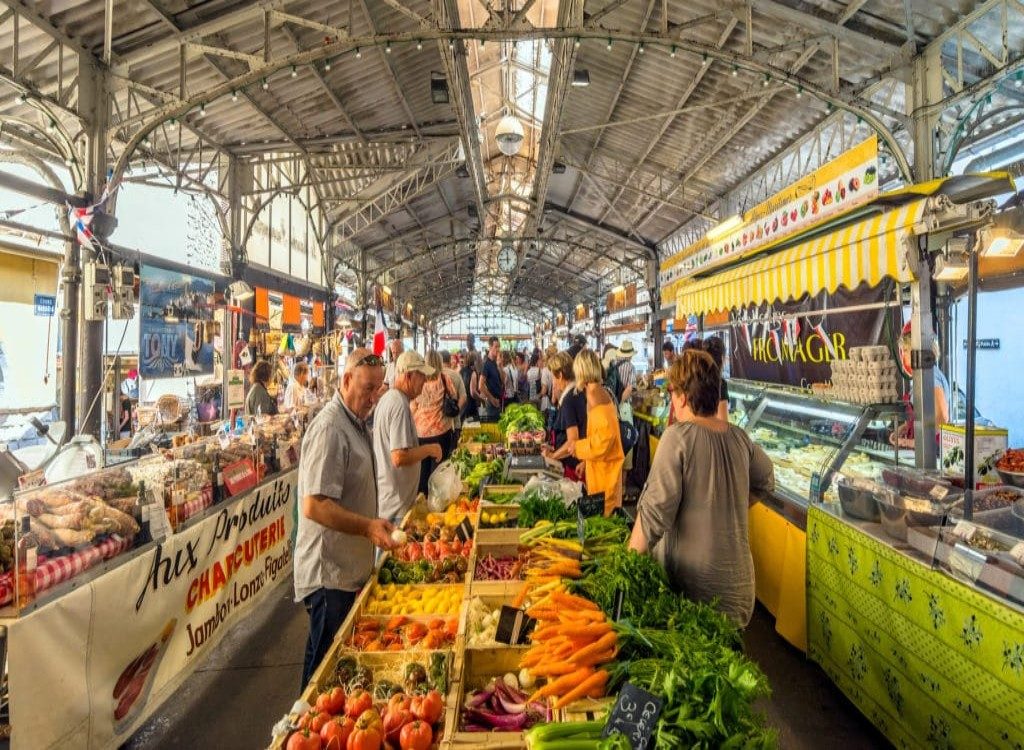 As well as numerous museums, Antibes hosts a variety of different markets and festivals year-round to enjoy. The provincial lifestyle, fresh produce and happy locals quickly convinced me that this was the place to be when wanting to escape the business and rush of other Coastal towns along the Cote d’Azur. There is something captivating about watching the local fisherman, florists, and grocers going about their day, basking in their town’s beauty. Of course, there are multiple markets across town, but one of the most prominent would have to be the Provençal market in the Cours Masséna. Another one of note is the night market on Juan-les-Pins’ Promenade du Soleil and Antibes L’esplanade du Pré-des-Pêcheurs in the Summer months of July and August.

From a clearly aesthetic point of views, Antibes is a gorgeous example of European history. It possesses mixed, yet rich cultural architecture. Furthermore, Antibes possesses an air to it that many other towns do not possess both in France and Europe. I encourage anyone who can, to not only visit Antibes but to relax into its atmosphere and purely exist in the spirit of the town.