What is the Festival d’Art Pyrotechnique ?

The Festival d’Art Pyrotechnique is an event in Cannes – or, more specifically, the bay of Cannes – that takes place during the months of July and August every year. It is an international pyrotechnic art competition that has been going on since 1967, with pyrotechnicians from across the world showing off their talents to an audience of spectators and judges. Like the Cannes film festival, there is a coveted prize: the “Vestale d’argent”, with past winners competing every 4 years for the “Vestale d’or”, the grandest of grand prizes for pyrotechnicians. There is also a special jury’s prize and the “Grand prix du public”, an award given to the pyrotechnician with the most spectator votes.

History of the Festival

The Festival d’Art pyrotechnique began back in 1967 as a collaboration between Ruggieri, an Italian pyrotechnics company, and Cannes, with the aim of creating an international pyrotechnic competition to allow famous pyrotechnicians to meet and compete on a world stage. Since its inception, the festival has been launched (both literally and figuratively) from a barge put up in the bay. From there, the pyrotechnics explode onto the scene, with the displays being choreographed to music and being in line with a theme. Nowadays, the festival sees over 100 000 spectators, with over 20 countries, from all corners of the world, having previously competed. 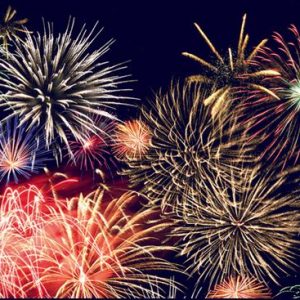 The Festival This Year

This year, the Festival d’Art Pyrotechnique is running from the 14th of July until the 24th of August, with a different competitor showing off their work each week. This year the pyrotechnicians are competing for the Vestale d’argent, although if you were to come again next year, they’d be competing for the Vestale d’or, as this year’s is the 3rd festival since the last one containing the “Vestale d’or” in 2018 (the festival was cancelled in 2020 due to the pandemic, for any of you maths-savvy readers). 2022 sees 6 pyrotechnicians from across the world, with representatives from France, Poland, Norway, Italy, Canada, and Switzerland all competing for the “Vestale d’argent”, “Prix special du jury”, and “Grand prix du public”

Each spectacle starts at 22:00 sharp, although the day of the week they are performing varies (Thursday 14th, Thursday 21st, and Saturday 30th July, and Monday 8th, Monday 15th, and Wednesday 24th August) so be aware if you don’t want to miss out!

What else Cannes you do at night ?

If you are looking to do something else at night, why not take part in our one our bar crawls? It is a great chance to see the nightlife of the city and meet others visiting the city. If you also enjoy doing things when it is light outside, maybe give one of our Free Walking Tours of Cannes a try. You can experience other aspects of the city that can be hidden at night while also finding out the stories behind them. We also host Food Tours, which allow you to see the cuisine on offer in this city, region, and country. If you’re looking to escape Cannes for a daytrip or two, check out our other tours, such as the ones in Monaco and Nice.