What is Cannes Lions?

Cannes Lions is the international festival of Creativity. It is held every year in June and is used as a means of bringing the creative communications industry together. For people in the industry, it is an occasion to learn and network, with there being many workshops and panels held throughout the festival. It also gives the industry a chance to celebrate, with many awards being given to innovative new ideas, allowing the best talent to be discovered.

The History of Cannes Lions

Inspired by the International Film Festival, Cannes Lions was set up in 1954 as the International Advertising Film Festival. This was done because a group of cinema screen advertisers felt people from their industry should receive similar recognition to those at the International Film Festival. The first festival was hosted in Venice, with the Lion Trophy being the grand prize, getting its inspiration from the Lion of Piazza San Marcos in Venice. The second festival was held in Monte Carlo, and then in 1956 it arrived in Cannes for the very first time. Following then, the festival alternated between being hosted by Venice and by Cannes, allowing both film festival cities to share it. Come 1984, Cannes became its permanent host. Nowadays it has expanded from its original scope to include all areas of marketing communications, and now serves as a place of debates and discussions, not just distinctions.

This year, Cannes Lions is an event being ran over the course of 5 days, running from the 20th to the 24th of June. It is being held in Cannes, with it being the first full festival back following the start of the pandemic. However, this hasn’t stopped it from hosting digital access, allowing it to be accessible to all. This year will see a whole host of speakers, with Sit Patrick Stewart and Ryan Reynolds already being confirmed! 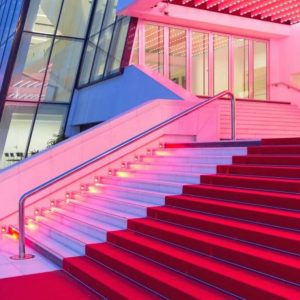 Plan your Corporate activities in Cannes during the Cannes Lions?

Whether you will or won’t be going to Cannes Lions, we have many things to do on offer in Cannes and around the Côte d’Azur. Why not take part in our one our bar crawls in Cannes? It is a great chance to see the nightlife of the city and meet others visiting. They can also be booked privately if you want to do it as a party of any size up to 500. If you are looking to do something during the day, maybe give one of our Walking Tours of Cannes a try. You can experience the history and culture of the city in only 2 hours! We also host Food Tours, which allow you to see the cuisine on offer in not just the city, but also the region, and country. If you’re looking to escape Cannes for a daytrip or two, check out our other tours, such as the ones in Monaco and Nice, with Nice also being the host of extravagant bar crawls and fascinating food tours.